The Chargers season ended with a blowout loss on Sunday. What’s new. The loss cemented their 49th straight year without a NFL Championship. Rather than waiting for the usual late game mistakes, they chose to hand this one to the Patriots early on (though, they did add a dropped punt at a key moment for good measure). Easily the most talented Chargers team in a decade, they might as well have never gotten off the bus. The coaching was atrocious, the defense couldn’t get off the field, and Phil Rivers looked like a shell of himself on Sunday.

It’s kind of sad when the announcers know what adjustments to make better than the coaching staff. That was exactly the case in this one, as Tony Romo repeatedly pleaded with Chargers Defensive Coordinator Gus Bradley to switch off of the zone defense. Brady tore through it like childsplay all game. Against a Pats team that loves to dink and dunk with short routes, I can’t for the life of me understand why the Chargers strategy was to give them exactly what they excel at. Tony also correctly pointed out that the Chargers again played 7 defensive backs throughout much of the game. That may have worked against a gimmicky Ravens offense, but of course Brady studied game film of it all week and blew it out of the water. Though this strategy may have been borne out of desperation, due to injuries at linebacker, it made it impossible for the Chargers to slow down an explosive running game. Sonny Michel went up and down the field at will, running for 129 yards and 3 touchdowns. He set Brady up with 3rd and shorts throughout the game, keeping the ball away from the Chargers offense. By the end of the game, Romo sounded exasperated, almost sad for another wasted Rivers year in a career that closely mirrors his own. 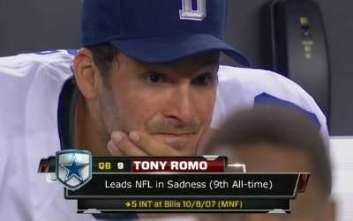 You could hear the suffering in poor Tony’s voice

The coaching adjustments didn’t come on offense, either. The Chargers continued to run Melvin Gordon into a brick wall on first down. He didn’t look healthy, and never saw the light of day. If Gordon was hurt, they should have turned to Justin Jackson earlier. Jackson has proven a viable substitute, and nothing could have been worse than Gordon (9 carries, 15 yards). Much like the last time the Chargers and Pats faced off in the playoffs, their dominant running back was hobbled and rendered useless. It would have been nice to see the Chargers employ more screens and quick throws to slow the Pats pass rush. The sad thing is, the Pats basically put on a clinic showing them what they should’ve done. They’ll have plenty of time to study the game tape over the offseason.

For all the praise that was lauded on this team and coaching staff, it deserves just as much criticism. Anthony Lynn has been mentioned as a coach of the year candidate. REALLY!? I remember several games being mismanaged at the end and this team winning in spite of him. I didn’t see any in-game adjustments all year and think sheer talent carried this team to 12 wins. It didn’t feel like they outplayed their talent level in any way. Bosa, Ingram, Gordon, Rivers, James, Hayward, King, Pounce, Williams, Allen. The list goes on and on for all-pro talent on this team, yet few of them showed up when it counted. Despite this, I don’t expect many changes on the coaching front. We have a tendency to ignore the mistakes when teams win, and the Chargers did manage to win a lot of games this year.

The biggest disappointment of the day was the performance from Phil Rivers. I can’t understand what happened to him late this season. He got off to such a great start, surrounded by the most talent he’s had since the LT years. The offensive line did a great job at keeping him upright. Until the second Ravens game, he was getting serious MVP consideration. It seemed, however, that the Ravens put together a blueprint he couldn’t counter. The Pats used it again yesterday, loading everyone at the line and blitzing at will. For some reason, this didn’t open up the short throws, as Rivers would basically either throw deep or get sacked on every play. You would think they would’ve found some holes in this scheme, with the Ravens using it twice against him in the last 3 weeks. Instead, it’s been the complete opposite. Rivers looked as flustered as I’ve ever seen him, with his biggest weakness, a lack of mobility, put on full display. His respectable stats (25/51, 331 yards, 3 TDs), don’t tell the story at all. Rivers was just flat out bad in this one.

Unfortunately for Phil, time is running out. A career year with so much promise, up in flames. Again, at the hands of Tom Fucking Brady, who has owned the Chargers like no one else. Unlike Brady, Phil knows his run is coming to an end soon. He’s acknowledged it several times, and it made Sunday’s game that much more emotional. For someone that pours his heart and soul into the game, it’s devastating to see him come up short time after time. In a career defined by bad breaks, Phil knows he has to be superhuman in these moments. He wasn’t today. As the leader, the soul, the rock of this franchise, he has to shake this painful loss off and come back with the same fire he always has. Gosh darn it, I hope he does.