The King has been an enigma since well before he truly deserved the title. We’ve been debating his legacy in the game since day one, instead of enjoying his immense talents. How funny does it seem now that we had to watch the incessant debate over Lebron’s legacy back in year 8? It’s like we felt compelled to stamp a final review on a book that we only halfway finished. It’s no longer much of a debate when the Stephen A. Smith’s of the world now proclaim Lebron a top 5 player of all time. He’s cemented his place in history. Now, all that’s left to be argued is meaningless really. Lebron vs. Jordan, Jordan vs. Lebron. Pundits can (and do) go in circles for hours, and get nowhere. Like comparing Jordan vs. Russell, or Bird vs. West, it’s just impossible to definitively compare players born out of different generations.

Now, Lebron also happens to be one of my favorite basketball players of all time. My liking of Lebron was born either because of or congruently with my hatred of all things Kobe Bryant. For some reason, I’ve always hated selfish basketball. My dislike of Kobe never had anything to do with him being a bad basketball player. Anyone with eyes could see he was an all-time great. My animosity for Kobe came from what he could have been. Why did he have to run my boy Shaq out of town? Why did he have to shoot the ball seemingly EVERY SINGLE TIME he touched it? Why did everything seem to have to be about him?

Enter, Lebron Mothafuckin’ James. So many times I defended his decision to pass to the open shooter at the end of the game, rather than shoot a contested isolation shot. It was the right play. His unselfishness, in spite of his immense talent, is what made him such a truly special player, and what drew me to him. He was never Kobe or Jordan, Iverson, or even Magic for that matter. He’s always been a mold of his own. A freak athlete the league has never seen, paired with a brilliant mind that always searches for the right play.

For all the praise that is heaped on Lebron, the truth of basketball remains clear. It’s something that I failed to truly appreciate when I mocked Kobe in the post-Shaq years. Every great, no matter how great they may be, needs help. And not just any help, but the right kind of great players to match their skill set. Kobe needed a big player that could rebound, score efficiently in the post, and play without the ball. Pau Gasol (and, to a lesser extent, Andrew Bynum) provided the perfect compliment to Kobe’s reckless-yet-devestating offense. Pippen provided the exact defensive machine and offensive versatility that Jordan needed. Shaq, as much as he hated to admit it, needed a Kobe, and replaced him with Dwayne Wade. And on and on the list goes. No great player can do it on their own.

The D Wade experience just wasn’t the same this year

In Lebron’s case, he absolutely needs an incredible scorer that can play well off the ball. He learned that in his first Cleveland go-around, when players like Zydrunas Ilgauskas, Mo Williams, and Antawn Jamison never had the firepower he needed. It’s why he jumped to Miami and back again. Yes, Chris Bosh and Kevin Love have been important to James’ Finals runs. But Dwayne Wade and Kyrie Irving have been essential. He could not possibly have won any of his championships without a scorer of their caliber, and he knows it. The Cavaliers incorrectly thought that Irving’s scoring roll could be replaced with Isaiah Thomas, and now James is left in an impossible position. There are no competent, consistent scorers flanking Lebron this year, and, as a result, he’s on an island.

With this in mind, Lebron had no choice but to push himself into that scorers mentality against the Celtics in the Eastern Conference Finals this year. His performance was legendary, worthy of all the praise it’s received. However, they were extremely lucky to make it out alive, and the team is eerily reminiscent of the ’07 Cavaliers team that Lebron willed to the Finals in similar fashion. That team, sporting the aforementioned Ilgauskas as it’s second best player, got demolished in four games by a far superior San Antonio squad.

Once again, they enter this Finals with some of the worst odds in NBA history. Once again, his supporting cast is miserable and forcing him to play a brand of basketball that has never worked for him. The corpse that once was Kevin Love may or may not be back for game one, but does it even matter that much? Jeff Green looked better than him as a replacement for God’s sake, and that’s a tough sentence to type out. George Hill comes and goes as he pleases. Tristan Thompson has all kinds of Kardashian voodoo mama juju all over him, and wasn’t even part of this shitty rotation just a few weeks ago. Larry Nance is playing like Jim Nantz. J.R. Smith will play just well enough one game to make us forget his last 5. This team is absolutely dependent on Kyle Korver playing out of his mind every night, and he’s the only player that seems to play any kind of defense at all. Kyle fucking Korver!! I mean, of all the shockers 2018 has to offer, that may just top them all. 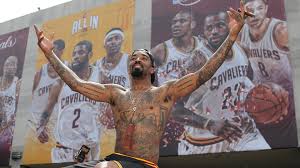 Lebron’s depending on THIS guy

Once again, Lebron will try to throw on his Superman cape and carry the team against all odds. Just as he did in ’07 against the Spurs, ’08 against the Celts, ’09 against the Magic, and ’15 against a Warriors team that has since added one of the top scorers of all time. How did it work out back in ’15? Like this year, he didn’t have Kyrie or Love (Love may still be on the team, but please). Lebron that series put up an unthinkable 35.8 Points, 13.3 Rebounds, and 8.8 Assists Per Game. Otherworldly numbers in the Finals. He led his team to 2 wins in a series that should’ve only gone 4. Still, because they lacked a complimentary scorer, he fell well short. This year, expect more of the same.